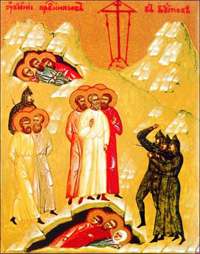 On November 1st 1981 the Russian Orthodox Church Abroad, under the presidency of Metropolitan Philaret, glorified (canonised) all the New Martyrs and Confessors of the Bolshevik period. During and after the collapse of communism, they were also glorified in Russia itself, in three different years – 1989 (New Confessor Patriarch Tikhon), 1992 (Metropolitans Vladimir of Kiev, Benjamin of Petrograd and those with him, and the Grand Duchess Elizabeth) and 2000 (all the remaining Martyrs including the Imperial Family).
We are including here three documents illustrating some of these important events :

1. An excerpt from Metropolitan Philaret's Epistle concerning the Glorification

2. Words of HH Patriarch Alexis II at the 1992 ceremonies

3. The article in the journal THE ROAD TO EMMAUS reporting the final Glorification in 2000 at the rebuilt Christ the Saviour cathedral in Moscow. You can download a PDF version here.

We hope that these three extracts will give you some idea of the deep significance of these events and of the importance of the witness of the New Martyrs for the life and growth of the Russian Orthodox Church in the future.

"Although in the history of the Church of Christ we see examples of martyrdom in all periods of her existence, still, before the Russian Revolution the exploit of martyrdom was something primarily of the first centuries of Christianity, when paganism strove by iron and blood to annihilate the Holy Church.

"We see something else today. With the appearance and consolidation of God-fighting communism in Russia, there began a persecution of the faith unheard of in its cruelty and broad scale. As one Church writer has defined it, Orthodox Russia has been on Golgotha, and the Russian Church on the Cross ....The Russian Church and people have given an uncounted multitude of cases of the martyric endurance of persecutions and death for faith in Christ...not merely hundreds or thousands, but millions of sufferers for faith--an unheard of and shocking phenomenon!

"But at the same time the Russian land is being purified of this defilement by the sacred blood of the New Martyrs who have suffered for faith and righteousness. The Russian land has been abundantly watered by this blood--watered, sanctified, and cleansed from the senselessness of the atheists and God-fighters! ....

"Great and numerous is the choir of the Russian New Martyrs. It is headed first of all by the sacred names of His Holiness, Patriarch Tikhon, the murdered Metropolitans Vladimir and Benjamin; Metropolitan Vladimir occupies a special place of honor in it as the first martyr who placed the beginning of this glorious choir. At the same time, an entirely special place in the choir of the New Martyrs is taken by the Royal Family, headed by the Tsar-martyr, Emperor Nicolas Alexandrovich, who once said: "If for the salvation of Russia a sacrifice is needed, I will be this sacrifice…" 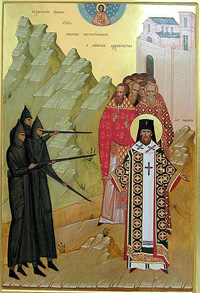 Martyrdom is bearing witness to the Truth of Christ and God's Church to the death, and Christ Himself, the "Faithful Witness" (Rev., I, 5), "to this end was born, and for this cause came into the world, to bear witness unto the truth" (John XVIII, 37), and to give up His life through suffering on the Cross for the redemption of many.

In the words of the Apostle, we have been redeemed "with the pre¬cious blood of Christ, as of a lamb without blemish and without spot" (1 Peter I, 19). To bear Christian witness is to give glory to God in living and in dying: "If we live, we live to the Lord, and if we die, we die to the Lord" (Romans XIV, 8).

The persecution of Christ's Church which arose in Russia in our time was God's will. And once again, as in ancient times, the blood of martyrs was shed in witness to the victory of Christ. Holy Patriarch Tikhon of All Russia, in considering the trials which had been visited upon his flock, courageously called upon them to share with him the cup of martyrdom. "If it becomes necessary to suffer for the sake of Christ, we call upon you, beloved sons and daughters of the Church, we call upon you to suffer to¬gether with us. If a redeeming sacrifice is required, the death of the innocent sheep of Christ's flock, I bless the faithful servants of the Lord Jesus Christ to pain and death for His sake."

It would be impossible to name all the new martyrs of the Russian Church in the twentieth century. Nevertheless we express the hope, that the proposed canonization of these first witnesses to the Truth, who in martyr¬dom shed their blood for Christ, will form the beginning of a further churchwide process of glorification of the many confessors of the Orthodox faith in our Church.

Metropolitan Vladimir (Bogoyavlensky) of Kiev and Halich was the first bishop to become a hieromartyr in the new era of persecution. With spiritual majesty and evangelical simplicity in his episcopal office he confirmed the remarkable unity of an upright life and a martyr's end, bearing witness to the faith of Christ "unto the death" (Rev. XII, 11). He completed his earthly service to God and the Church on January 25, 1918, in the city of Kiev-the cradle of Christianity in Russia, ascending here to his Golgotha.

Another bishop and inspired man of prayer-Metropolitan Benjamin (Kazansky) of Petrograd and Gdovsk, spiritually nourished his faithful chil¬dren, while persecution from without and factions from within threatened to shake Christ's Church. Faced with imminent death he said, "I am a faithful son of my people, whom I love and have always loved. I have given my life for them and I am blest in that the common people have repaid me with that same love, placing me in that position which I now hold in the Orthodox Church. I do not know what sentence you will pass upon me - life or death - yet whatever your pronouncement, I will raise my eyes upward with the same reverence, make the sign of the Cross and say, "Glory to Thee, O Lord God, for all things!"

The Archimandrite Sergius and the faithful, Iury Novitsky and John Kovsharov, who were murdered along with Metropolitan Benjamin as his faithful fellow warriors, went to the slaughter along with their bishop.

The Grand Duchess Elizabeth, founder of the Martha-Mariinsky Convent in Moscow, consecrated her pious Christian life to charitable works, helping the poor and the sick. Together with her cell attendant the nun Barbara she received the crown of martyrdom on the feast of St. Sergius of Radonezh, July 5, 1918 o.s.

Through the intercession and prayers of the glorified new Russian martyrs may the Lord strengthen our faith and that of the flock of the Church, redeemed by His precious Blood, and may the blood of the new martyrs become for the faithful of the Church a seed of faith which will spring forth to life eternal. Amen.

ALEKSY,
Patriarch of Moscow and All Russia

Members of the Holy Council of Bishops