There are four or five saints of the pre-schism period connected with Sussex, the county in which our Sisterhood is situated, but only one is particularly associated with East Sussex. She is Saint Lewinna who was martyred in the late seventh century. The following is an account of the little we know of her.

Once there no doubt existed an locally composed life of the saint but this has long ago vanished. Most of our knowledge now comes from an eleventh century account of the secret removal of her relics from a church near Seaford in 1058 to the monastery at Bergues (Berg) in Flanders by one of its monks.

The monk, named Balger, had intended to land at Dover but was blown off course and landed further west, most probably at Seaford. Inland he found a church dedicated to Saint Andrew where he was told the body of Saint Lewinna rested and where miracles happened "daily" because of her heavenly prayers. Balger seems to have stolen the relics by trickery and certainly from then onwards nearly every memory of the saint disappeared in England though she remained a much-loved intercessor in her new home. Bergues became part of France in the reign of Louis XVI and the monastery was destroyed in the French Revolution. As for the church of St Andrew where her relics had rested in Anglo-Saxon times, there is a lot of controversy concerning its identity, but the most likely candidate is Alfriston, an attractive village north of Seaford.

Sussex was the last of the seven Saxon kingdoms to become officially Christian and east Sussex remained pagan longest of all. St Wilfrid of York, the Apostle of the South Saxons (ie the people of Sussex) several times experienced their extreme ferocity. There is no early evidence to support the idea that St Lewinna was a Briton, as some accounts state. She was almost certainly an early South Saxon Christian martyred by her fellow countrymen who were still pagan. The date of her death was during the period when St Theodore of Tarsus was Archbishop of Canterbury, probably about AD 670. This was before St Wilfrid's missionary labours, though there would have been isolated Christians in Sussex at this time. About three centuries after her martyrdom, her relics were solemnly translated to St Andrew's church so the place of her sufferings must have been nearby. 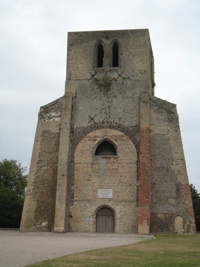 After 1058, her relics remained at the monastery of St Winnoc (a Welsh saint) in Bergues, apart from occasional processions through neighbouring towns and villages, when many miracles are described as taking place. In 1383, Bergues was attacked by allies of the French king and it is recorded that the reliquaries of Saints Winnoc, Oswald, Lewinna and Idaberga were stripped of valuables. It is interesting that all the relics possessed by this important monastery were of saints of the British Isles. 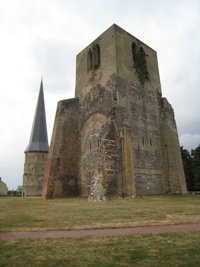 In 1558, during the French wars of religion, Bergues was captured by French Protestants and all the remains of Saint Lewinna disappeared except for one rib bone. This was venerated at the monastery until the French Revolution and two annual feasts were kept in her honour, on 16th June and 24th July. St Winnoc's great monastery was largely destroyed at the Revolution but some of its relics were transferred to the parish church of St Martin, including that of our saint. Much later, in 1928, the priest of St Martin's Bergues rediscovered the relic (or rather a part of it) and displayed it for veneration. Very sadly the church was almost destroyed during bombardment in the Second World War. Afterwards the church was rebuilt but the relic was not found.

The proper day for commemorating Saint Lewinna the martyr is 24th July/6th August.

Footnote: If any reader of this account has more recent and cheerful information regarding the whereabouts of the relic of St Lewinna, we would very much like to hear of it.